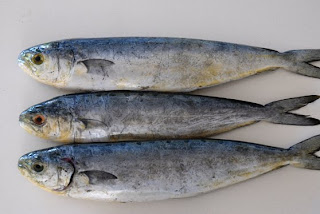 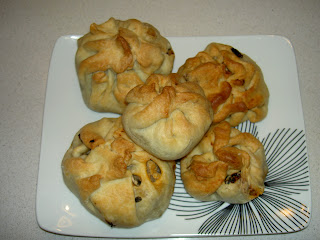 Thank you for the recipe! Very interesting sounding with the walnuts and sultanas(have yet to try one like that)! I made lampuki with a tomato, caper, olive sauce last week and we are eating fish soup made from the leftover parts today so we are in the Lampuki way at the moment. Was thinking this year I would try my hand at making Lampuki pie, so thank you!

SQounds absolutely mouthwateringly delicious!!! I think I would cook the spinach seperatly as does not need very long to cook. The only thing I'm not quite sure about are the raisins, but I suppose one could easily leave them out, no?

Jientje: to be honest with you, I was also sceptical about the raisins but I assure that the sweetness of the raisins complements the bitter-salty taste of the dorado fish. With each bite of my little pies I kept savouring the little sweet raisin bursts. (However I left out the walnuts as I thought the texture of the walnuts wouldn't go well with the soft mushy mixture of the rest of the ingredients) At the end of the day, it's all about tastes!

Juniper: Be prepared to spare at least one hour in removing the bones from the fish. I assure you that your efforts would all be worth it as this pie was incredibly good.

Mmm YumYum I'd love a taste of those delicious looking pies! Thanks for the recipe and I will pass it on. Unfortunately my clan don't like this fish that much so I usually eat it either alone or when we dine out. It is not worth the trouble to make it just for me but I hear someone is buying me some ready made ones which I am looking forward to : )
Oh by the way, I love the idea of your making the qassatat.

As Mediterranean as I am, I hate fish lol!!

Zen, I would like to make a post on this on my Fizz blog as an example of authentic Maltese cuisine. The way I do this is to write an intro, steal your photo, then link here for the recipe and directions. Do you mind?

No problem AV - just go ahead.