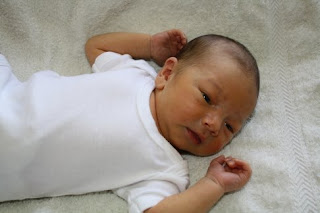 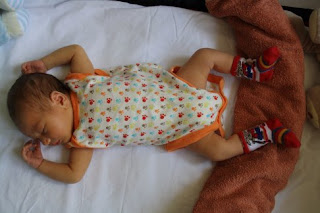 Hey friends, I present to you the little dinosaur that I was carrying these past nine months. Here's Zack, born on the 16th of August at 4:20 pm. Thank God I've been blessed with a quiet baby. He's a little treasure. As you may have noticed my posts have slacked. Zack's keeping me very busy with his daily feeds and nappy changing. But I just count my blessings every day and enjoy this lovely miracle every moment of my life.
Posted by Suki at Friday, August 27, 2010 17 comments: 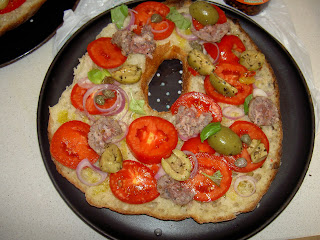 My ftira with all the ingredients except the potatoes

Whenever we go for a summer holiday to our sister island of Gozo we always make sure to order the scrumptious ftira (a round flat bread) from Tal-Maxokk Bakery. I know it's full of carbohydrates but I cannot help indulging in its exquisite flavours. This summer we had to give Gozo a miss since I'm reaching the end of my pregnancy. So to make up for it, last week, I decided to try making a 'gozitan' ftira of my own. I cheated a bit because I used a ready-made ftira but anyway the result was simply gorgeous. Here's my version:

First I divided the ftira in two halves and drizzled the bread with a good dollop of olive oil.

I started by boiling two small potatoes for just 10 mins. In the meantime I lay the tomato slices on the bread. I added the sliced onion, capers, sliced olives, sliced maltese sausage and some fresh basil. I thinly sliced the potatoes as if I was going to prepare crips and lay the almost semi-transparent slices on the bread. Season with salt and pepper.
I drizzled some more olive oil on the toppings and baked for about 15 minutes until the potatoes turned golden and crunchy! 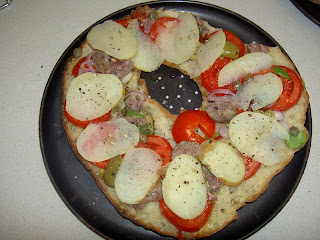 The end result: my ftira covered with thinly sliced potatoes (not baked)
Side note: Gozo bakeries cook the Ftira dough either closed or open. The closed Gozo ftira enclosed a filling and was intended to serve as a workman's lunch. Toppings and fillings usually have potatoes and /or cheeselets for example: cheeselets, eggs and grated cheese; potatoes, tomato, anchovies and olive; or ricotta topped with slices of potato; or sliced potato, Maltese Sausage, cheeselets and rosemary. Among many others!
And for all my foreign bloggy friends who have asked me about the ftira recipe I'm including a recipe which I found on the internet. To be honest with you, I haven't yet tried it out but will do so soon.
Ftira recipe
For the dough, 400g of plain white flour
100ml of Extra Virgin Olive Oil
Salt/Water, as required
To make the dough, sieve the flour and put it into a food processor with the salt and the olive oil. Blend the mixture, slowly adding water until the dough forms into a ball. Put the dough into a plastic bag or bowl and chill it in the fridge for at least an hour. Preheat the oven to 200 deg. C. Spread the dough as thinly as possible so that it is at least 5cm wider than the baking dish. Add the ingredients as above. Fold the edges of the dough inwards, drizzle some olive oil, and season with salt and pepper. Fold the edges of the dough inwards, drizzle some more oil over the top and bake the ftira for 15 minutes, or until the dough is just starting to turn golden.
Apart from that I found out about a Maltese club in Uk which promotes Maltese food. It's called Maltese Culture Movement. I got to know that they can take orders for and supply the following at reasonable prices: galletti, gbejniet, ftira, pastizzi, imqaret,Kinnie, Cisk, Hopleaf, Blue Label. Any body interested can contact them at the above link.
Posted by Suki at Friday, August 06, 2010 12 comments: