A box of trinkets 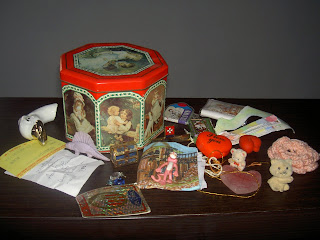 A few months ago my father reminded me that I had a lot of stuff left at my parents' house. So off I went to check what possessions I had left behind and forgotten all about. I had a good laugh looking at the stuff that I had kept through the ages.

One of them was this box of trinkets. Actually I used to call this my treasure box and it had its pride of place on my dressing table. The box itself was originally a cookie box but it had such lovely paintings on its exterior that I had decided to keep it. When I opened it it felt like I was opening Pandora's box - so many memories closed inside that box.

I had practically forgotten what I had treasured through the years... the broken head of a porcelain duck (I think one of my sisters broke mum's porcelain duck and I decided to treasure its broken head) a football sticker given to me by a boy I used to fancy at primary school, small velvety teddybears that must have been the craze at the time, a dinosaur rubber (not that I was a fan of dinosaurs!) and a pink panther one , all forms of hearts I came across, rubbery ones, wax ones and plastic ones too.

I found a peacock -craft which I had done ages ago and which at the time was something that I was really proud of because I had created it out of my own imagination. An australian hanky, a treasured note from two ex-friends of mine, an underground train ticket ( these trains somehow fascinated me at the time), little notebooks, my treasured Air Malta hostess gold-plated tag, a woven flower given to me by my hubby's nan and a little treasure chest in which I used to collect all the little lost gems that I found around me. At one time I had built a good gem collection but I think my sisters got hold of them. All these treasured possessions mean nothing to me now but I can't get myself to throw them away. Isn't that strange ?
Posted by Suki at Monday, February 15, 2010 8 comments: