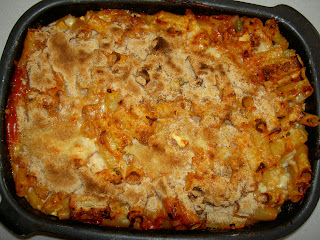 Traditional Maltese food is clearly marked with Mediterranean references. Italy, especially Sicily (called ‘the elder sister’), has left significant traces on Maltese food. Pasta dishes like 'ravjul' (ravioli), lasagna, 'imqarrun' (baked macaroni), with their hundreds of sauces, are all dishes of Italian influence. Since Malta is so close to Italy, pasta has always been one of the staple foods of the country.
Most of our Maltese recipes have been passed on from mother to daughter for generations but were never committed to paper until two authors, namely, Anne and Helen Caruana Galizia undertook the hard task of collecting them in one book in the 1970s. The recipe that I am posting here is an authentic Maltese one which I have found in their lovely book entitled: The Food and Cookery of Malta. My mother, who has their first publication, often referred to this book for particular recipes. And while she cooked I used to sit next to her quietly leafing through its pages. I don't know what I found fascinating in it - after all it had no pictures. Anyway, I made it a point to buy the book once I grew up and had my own kitchen. This definitely could be one gift which all Maltese expats (or even foreigners who liked our traditional dishes) would appreciate. Here's the recipe...

2tbsp olive oil
1 large onion, sliced
50g bacon, finely chopped
2 cloves garlic, crushed
400g minced beef and pork
salt and pepper
3tbsp tomato puree
400g tin of peeled tomatoes
125ml beef or chicken stock
1 bay leaf
grated fresh nutmeg
200g chicken livers
400g macaroni
4 large eggs , beaten
4 heaped tbsp grated Parmesan
Method
To make the sauce, heat the oil and fry the onions gently until golden, add bacon, garlic and minced meat, salt and pepper. Use little salt at this stage. Stir well and cook for 15 mins. Add the tomato puree, the tomatoes, stock and the bay leaf. Grate in some nutmeg. Simmer, covered for about 30 minutes, then uncovered for another 3o minutes.
If using chicken livers, remove any discoloured parts, chop into large pieces and fry lightly in oil. Cool and remove the stringy bits.
Boil the macaroni in plenty of salted water until 'al dente'. Pour a cup of cold water into the pan as soon as the pasta is cooked. It is important it remains underdone so that it will retain its shape and texture at the end. Drain. Mix the meat and tomato into the macaroni. Add the eggs, the cheese and season again if required with salt and pepper. Mix all well together in large bowl. Leave to cool.

In a large oven-proof dish put in a layer of macaroni and meat, then a layer of chicken livers and cover with the remaining macaroni. Bake at 220°C for 15 minutes. Reduce to 180 C and continue cooking for 30 minutes.

A perfectly baked 'imqarrun' is crunchy on the outside and moist inside. This dish improves with keeping. You will also find that it slices better if allowed to stand for 30 minutes after it comes out of the oven.

As you can see it's an authentic Maltese one what with the copious salt amounts and ingredients that are so high in cholesterol. No wonder many Maltese of the older generation are so plump! I usually use a healthier version of the recipe with less eggs, salt, and sometimes I omit the bacon and liver. It's definitely a less tasty macaroni but at least more healthy! If you feel like trying out this recipe it's up to you to choose whichever version you deem best.

I too have one of the earlier prints of the book you wrote about, also without pictures. Somehow it is still one of my favourites when I have to refer to it for certain recipes which, as you so rightly added, I prefer to alter for a healthier version.

Zen, my son and daughter are crazy about this dish... they love it!
It's a Sunday favorite in my family especially in Winter. I don't use chicken livers and neither bacon, nor the garlic, onion and eggs but it is still delicious and just as you said it improves with keeping, the portions left over are always better the next day.
Hugs,
Sue.

In my family we all love this dish. Neither I do not use chicken livers or bacon, garlic and onion. As craft Sue said the next day it tastes even better......mmmmmm actually this will be our dish for tomorrow ;) and I can bring it down to the beach with us too :) brilliant.

I will have to try this recipe for baked macaroni. I found one online and tried it the other day ( see my blog) and although it turned out okay... it just wasn't right :o) Would you happen to have a recipe for the Maltese bread too?

I'll take one of those liver-less slices too please! I can't bear the smell of liver cooking, when my mother used to make it I'd have to literally leave the house.

First of all welcome aboard, Dina and Angie.

Dina: Hope your macaroni dish was a hit at the beach.

thanks so much for posting this recipe. came across your blog by accident, but glad i did!

After denying my maltease heritage most of my life, I'm finding I want to find out more about this amazing country where my father came from. This recipe reminds me of growing up and brought back a lot of memories previously forgotten. The power of food! Thank you. Lisa

Hi Lisa ..it's a pity that you denied your Maltese heritage for so long but it's never too late to change, isn't it?

Thanks so much for sharing that awesome recipe. I grew up in Malta, then moved to Canada, and now live near the Pacific Ocean in USA (almost 30 years later). Talk about globe trotting! Anyhow, I really miss Malta, where I started from, and still love the Maltese cuisine best (slightly biased I know, hehe). I lost track of this recipe somehow, so thanks for the helpful hints. These recipes are hard to find (the authentic ones are, anyhow), and yours sounds like the amazing Mqarrun I grew up with... Brings back visions of the amazing Mediterranean sea, and endless summers. Thank you!!!

Hi Heather! Wow! You have travelled quite a lot!I'm glad that you found my recipe helpful. I'll be posting more authentic Maltese ones in the near future so keep in touch.

A wonderfull recipe, which reminds me of my mum's cooking when I was younger. Don't know wether it was becuase I didn't bother taking notice how she made it, or wether I plain forgot, but I had to look up the recipe. I don't remember her using chicken livers,though always plenty of garlic and the eggs are essential to firm up the mixture (like a loaf), and always crunchy on the outside. Cheers.

I just made this dish as part of a Maltese Pot Luck. I'd never tried it before but it came out very well and was well liked by all. I did not have chicken livers or bacon handy so left those out but will try it again with the original ingredients soon.

One thing that did strike me as I put the dish together was how close this is to the rather horribly named "American Chop Suey". It is after all just a variation of baked pasta with a Bolognese sauce. Still, the addition of eggs and parmesan as well as the chicken livers certainly do distinguish it.

I'll make it again and use all the original ingredients available next time.

Hey Edward! You mentioned two phrases which I never heard of: Maltese pot luck - is this a kind of celebration? and American chop suey - never heard of it!! to be honest with you - I usually omit the chicken livers and garlic, and sometimes I add some corned beef to the mince mixture. The taste of corned beef with minced meat is simply delicious.

I make this all the time, right here in Australia. My daughter loves it. I don't use the livers or onion, but plenty of garlic. Pork mince is much tastier than beef. I purposely make it well ahead of time, because it's so much better when the flavours settle and blend. It also freezes well.

Now, that my time is quite limited I try to make the basic version of macaroni - meat and tomato puree- no onions, garlic, liver. As u said Rosanne I use pork mince too added to some corned beef. I just love this version.