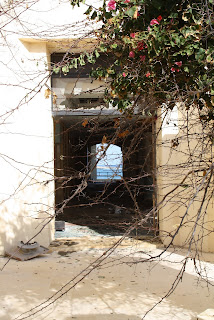 What is it about abandoned buildings that’s so alluring? What causes us to be fascinated by the forgotten ruins of structures that once teemed with life? There is something so intriguing and mysterious and beautiful about abandoned and decaying old buildings. It may have something to do with the original purpose of those buildings. Homes and towns where families once lived are fascinating, but there’s something tragic and amazing about hospitals, churches, hotels and castles. These places were often the setting of life-changing experiences. When they’re abandoned and left to return to dust, we can’t help but imagine what used to take place within those walls. 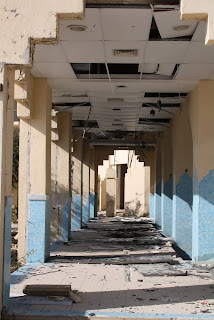 The destruction of the inside makes the building strangely peaceful while reminding us that, without human intervention, our man-made structures are quickly taken down by nature and by time. The ex-Corynthia Jerma Palace Hotel in Marsascala is one such example. This four-star Hotel used to be Malta's most prestigious hotel in the south. It closed down in March 2007 after 25 years in operation, owned by Libyan Arab Foreign Investment Company, which also owned the land, and operated by the Corinthia Group. 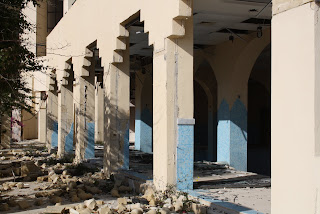 The forces of erosion have dilapidated the building. The hotel was built on a peninsula facing the raging Majjistral and Scirocco winds and the sea, the wind and nature reduced this once splendid hotel into a heap of ruins inhabited by a massive colony of rats, mice and other infected insects. Other areas have been burnt down. 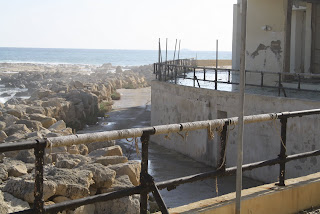 Palm trees, yucca and bougainvillea plants still thrive despairingly in this once-desirable place. The empty pools echo the happy cries of children of ages gone by. Stray cats roam the abondoned verandah in search of some shade from the relentless sun. Teenagers lurk in the darkest corners. Lovers hide in discreet places. Drug users leave their syringes lying about and now it seems that illegal immigrants are squatting on the site. This is what's left of the only hotel in the Southern part of our island. Such a pity...
Posted by Suki at Thursday, July 29, 2010

What a pity to let it go to ruins... but Zen, did you know that it is still advertised on the Internet? Yes here's the link, I don't know if it's the same hotel you posted about:
http://www.dilos.com/hotel/7987

I love abandoned places like that. They have this sense of mystery to it :D

I'm like Nick, I love to roam through old abandoned places. Have done ever since I was a kid and the only one brave enough to explore a "haunted house" near where we lived.

That hotel has become an eyesore. I think they should just pull it down. The same goes for the Riviera hotel. One of these days it is oing to come tumbling down the cliff.

Yes indeed a real pity! I too am fascinated by these abondoned buildings but the real eerie part of this is as Sue said that it shows on the internet still. However, I tried to book and it says No hotel found, I certainly hope so, as I would not want to book and find it is a ghost hotel!!!
Thanks for sharing this interesting post Zen : )

Nice photos and sentiments, I could not agree more... There is a old half completed hotel near Ramla bay on Gozo that really makes me wonder and want to explore, the one above Apples' Eye as well.. so much potential and hope in its details and yet its left to the elements.. completely abandoned ... something sad about these places... dreams unachieved... the neglected structures that once were given so much care and attention.

It makes me sad... but they are alluring at the same time.

Here in Texas where I live, we are in a period of rapid growth. Shopping strips and buildings that were busy and thriving 5 years ago are now closed and businesses have moved on to shiny new quarters.

One thing is making me happy. There are redoing downtown Dallas and the old really cool building and making them into apartments for the "up and coming folks". That is so much better than bulldozing them down.

Those buildings are just beautiful.

I love this blog!

Another one is in Bahar ic-Caghaq I think (off the Coast Road)... can't remember the name, but it was left in ruins for years too. A friend and I had once gone there to explore, found all sorts of things, down to menus and broken cash registers and beds. It almost felt haunted by memories of so many surely happy moments.

I don't know whether it's still in the same state, I'd heard something about it being taken over and rebuilt into apartment blocks, but it really was a sad sight.

Hope you're well! Is that clock ticking loudly yet? :)

The best old buildings in Malta are those old low-lying farmhouses with external steps built into the sides of walls, leading up to the flat rooftop. Some have arched windows, a well, and a courtyard enclosed by dry stone walls and prickly pear hedges. Depending on the season, and if the farmhouse is inhabited, you see a row of pumpkins ripening in the sun, or an old glazed jar used for storing rainwater. Trays of halved tomatoes dry in the sun, or a line of brilliant white washing flaps in a mild sea breeze... I wonder if that Malta still exists. I have included all these things in my novel "Death in Malta". It is a nostalgic trip in a way. Find it here.