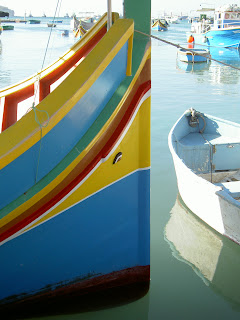 (Luzzu moored at Marsaxlokk)
Around 1000BC the Phoenicians decided to colonize Malta, bringing their Semitic language and culture, and becoming the direct male-line ancestors of about a half of the modern Maltese population. They used the islands as an outpost from which they expanded sea explorations and trade in the Mediterranean. They bequethed us the designs of their lovely coloured boats. Our Luzzu (pronounced loot-su in Maltese) like the Maltese cross is one of the symbols associated with Malta. The luzzu, painted in the traditional colours of red, blue and yellow, is a sturdy and reliable sea craft and can be put to sea in almost every kind of weather. Primarily, the luzzu is a fishing boat but it has other uses such as ferrying locals and tourists across the Grand Harbour. 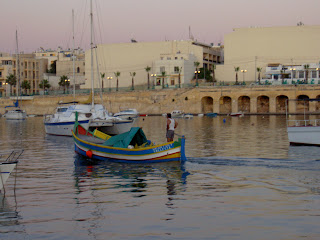 (Luzzu on its way out at sea - taken at sunset)
When the sea is dead calm and it’s a clear and beautiful summer day, you may get the opportunity to catch a solitary luzzu out at sea – a soothing and breathtakingly beautiful sight that will make a perfect postcard moment. You can also catch a glimpse of these unique Maltese boats at Wied iz-Zurrieq, Marsascala, St Paul’s Bay and at many other seaside villages. They are indeed one of the main attractions in Marsaxlokk, which is Malta’s largest fishing village. 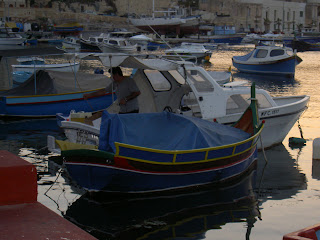 (One of the many luzzus berthed at Marsascala -taken at dawn)
This Maltese boat is a highly sturdy sea craft and is very much preferred by the local fishermen to other modern sea crafts. In the old days, it was much smaller and had sails. Nowadays, these boats are much larger and are powered by a diesel engine.
The colours of the boat are rarely ever changed, mainly out of superstition. So a fisherman will continue painting his boat in the same colours that his father and grandfather had used before him. Superstition plays an important role with these boats. All Maltese boats have the Eye of Osiris painted on them. The eye is believed to protect the fishermen from any harm when they’re at sea. On either side of the prow will be the carved and painted eye of Osiris: the Phoenicians' god of protection against evil: an example of ancient myth in modern times. The Maltese people are very superstitious and the eye is there to ward off the devil and to give protection to the small fishing boats.
Posted by Suki at Wednesday, June 09, 2010 9 comments: