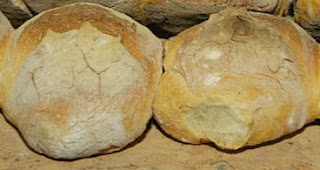 No bread compares to the traditional Maltese loaf and I’m sure that many out there agree with me. It’s so wholesome and tasty and yet so plain! As in many other places, what was poor man's fare is now rich man's favour. Not that one has to be rich to acquire such food. Many Maltese still eat it as a snack or as part of their supper. Both the stonecutter in the quarry and the farmer in the field, as well the family relaxing by the seaside on a delicious Summer evening, all love to dig their teeth into this tasty meal. It satisfies the taste buds and fills the stomach in the simplest and most complete way. It is inexpensive and easy to prepare, but it is true that richer foods and faster food have replaced most of what today can be considered as traditional food.
In the past, the manual workers used to take lunch which consisted of half a loaf of our excellent bread, hollowed out and filled with tomatoes, oil, olives, anchovies and accompanied by a glass of wine. They then wrapped it up in a cloth for freshness and then sliced it up with a penknife at the time of eating. It was very filling and practical especially for outdoor workers. This tradition is unfortunately giving way to the more regular sandwich.

When I sometimes pass in front of a bakery the heavenly smell of baking bread evokes memories of when dad used to come from work carrying with him a freshly baked bread still crackling hot. We kids used to make a feast with a simple loaf of bread. Mum sliced the bread and we siblings were left free to prepare our Hobz biz-Zejt the way we wanted. I was usually allowed to have the round crusty part (il-genba) from which I dug out the middle and filled it up with all the stuff that I could get hold of.

The term ‘Hobz tal-Malti’ makes me conjure up images of this delicious snack eaten on the sand, watching the sun set, with the salty sea smell lingering on one’s skin. Hobz biz-zejt somehow always tastes better eaten at the beach – did you ever realise that? So what exactly is this hobz biz-zejt? If I had to translate this term it would literally mean "Bread with oil” which up to a certain extent is true because drizzled oil is one of the basic ingredients but it has more than just that. And what goes on in this Hobz biz-Zejt??

The first thing you have to do is to get hold of a fresh Maltese loaf (hobza). The crust should be cracked and crunchy and the middle soft and white. Cut thick slices of bread. Halve a couple of ripe summer tomatoes and rub the cut side over the bread until it gets a reddish hue. If using tomato paste, (kunserva) just spread over the bread. Next dip one side of the bread into a plate of good olive oil. Or else you can drizzle the oil onto the bread. Sprinkle with salt and freshly cracked black pepper. That’s the basic recipe. What follows is up to you. You can either have it as it is or else add some of the following ingredients. The other ingredients vary widely, although capers and olives are almost universally included. Here is the list of ingredients I compiled: 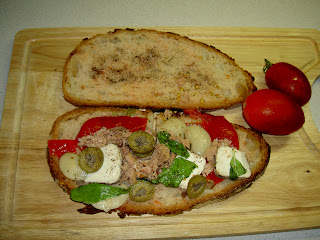 Butter beans marinated in garlic and oil, olives, marinated vegetables, lettuce, anchovies, tuna, onion slices, peppered cheeselets (gbejniet), capers, marjoram, mint, basil, pickled onions, bigilla, sundried tomatoes, cucumber slices, artichoke hearts and even ham. Yes!! I was told that the Qormi people like having their hobz biz-zejt with ham! My dad who hails from that town often puts ham in it and I can vouch that it is very tasty.
Posted by Suki at Wednesday, June 17, 2009

Zen, this isn't fair... where do I get Hobz tal-malti here in Italy... I'm just joking :)
I do find a similar kind of bread with a wonderful crunchy crust here and I assure you it's as good as the maltese bread and I often make hobz biz-zejt with it too.
I love it and my husband loves the maltese ftijra prepared that way too when we are in Malta.
Sue.

Hi Zen I really enjoyed reading all about our Hobz Biz-zejt, definitely the all time favourite for me, you can conjur up so many different fillings for it too but I have to have my capers! And definitely like you said, it tastes best next to the seaside : )
I think I have to catch up on all my favourite blogs since I was away with a PC and now it seems it will take forever but I'll get there!

We have just added your latest post "Food Hunter's Guide to Cuisine" to our Food Directory . You can check the inclusion of the post here . We are delighted to invite you to submit all your future posts to the directory for getting a huge base of visitors to your website and gaining a valuable backlink to your site.

provides the history of the maltese bread The piece of Malta many miss most when abroad for long, is so good and wholesome that "If you could judge a country's wealth from its bread, Malta would have to be the richest".

"Hobz biz-zejt somehow always tastes better eaten at the beach – did you ever realise that?" I agree :)

Reading the post has made me really hungry :) though I've just had dinner! all those ingredients that I love...kunserva, bigilla, gbejniet :)