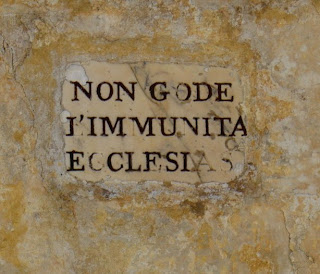 Wayside chapels have been a feature of the Maltese landscape for at least 500 years. Their origin dates back to the times when the Maltese Islands were much more sparsely populated, and the many small isolated farming communities found it necessary to erect their own places of worship. One of the characteristics of these chapels is the marble plaque near their entrance: NON GODE L’IMMUNITÀ ECCLESIASTICA. It was a warning to malefactors. This means that the chapel did not have the privilege of giving protection to those who had committed a crime. In the past many churches had this privilege of protecting criminals from the civil authorities. Those that did not have this privilege fixed this plaque to their facades.
In the past the church in Malta was immune from civil law jurisdiction, and this permitted malefactors to escape justice by taking refuge in a church or chapel. This meant that anybody breaking the law had the chance to flee for sanctuary into any church and hence could not be arrested by the authorities as long as one stayed inside. The crime rate in the mid-eighteenth century was quite high. Burglary, theft, deception, defrauding, brawling and fighting were the order of the day. It was not only ordinary lower class men who came into conflict with the law by stealing cattle or by committing any other crime. In those days, even the Hospitaller Knights broke the law by brawling and fighting duels, although they were prohibited to engage in such activities. Even a respected priest, once, stole plenty of silver plates from the French Auberge!!!
Fugitives hiding for sanctuary in churches often were supplied with all necessities, such as foodstuff and clothing, by friends and relatives. Some of them were able to hide out for 30 to 40 years or even until they died!! Unbelievable!! These people must have had a strong resilience. Although the British government abolished this immunity permanently in 1828, many existing chapels did not remove the small plaque on their facades.
Posted by Suki at Wednesday, June 10, 2009

Zen,
I just popped over to say thanks for your comment on my blog, it is a real pleasure for me coming over to see what you are posting. I was thinking ... what about posting something on the old milestones, if there are still any around, I remember there were some when I was small but I wonder if there are any left on the island, I doubt it...with new roads and the ever growing building sites ??? Well, just an idea.
TA TA
Sue.

How fascinating. I remember seeing many small chapels around Malta and wondering about them. Now I know, and better still, I know more of the story behind them too :).

Sue, posting about milestones has already crossed my mind but up to this present day I haven't yet spotted a milestone in my daily trips. And moreover there is not much info about them. But I won't give up!