The feast of Imnarja and the Maltese traditional dish - Il-Fenkata

Yesterday, June 29th, we Maltese, celebrated the feast of St Peter and St Paul, more commonly known as Imnarja, (derived from the Italian Luminaria meaning illumination). It probably refers to the bonfires that were lit up during this feast. This major festival commenced in the time of the Knights of Malta who could eat rabbit any time they chose and enjoyed hunting them for sport. And to add insult to injury they prohibited us Maltese from eating rabbit with the one exception of the feast of Imnarja.

So to make up for what the Maltese were missing they used to flock to Rabat on the eve of the feast, on foot or using horse and mule driven carts. They would then gather at Saqqaja, on top of the hill in Rabat, and would recite the rosary and other prayers. Later they would join the Bishop and his Cathedral Chapter in the procession towards Mdina. Accompanying the procession one would also find the daqqaqa and the folklore singers (the troubadours) wearing priestly robes. Later on they would drink, cook rabbit, sing folksongs and dance away the night. In the past marriage contracts also stipulated that the husband must take his intended wife to the festival of Imnarja.


Nowadays Imnarja is celebrated in and around the historic town of Rabat and features an agricultural fair with local produce on sale, livestock competitions, marching bands and horse racing in the afternoon. The most traditional and folkloric part of the festival takes place in woodland at Buskett, near Rabat, where people from all over the island flock to enjoy folk music and singing. Beneath the trees, people linger until late at night, tucking in to rabbit stew (il-fenkata) which is a Maltese speciality. If you think of rabbits as pets rather than good food providers, I suggest you skip this meal. Many people, however, enjoy this traditional Maltese meal.
The fenkata has now become the national dish and is promoted on tourist menus. A Fenkata today is best described as a kind of rabbit outing or celebration where a family or group of friends goes out into the country to eat a dish of spaghetti and rabbit. The rabbit, marinated overnight in wine, garlic and bay leaf, is lightly browned with a very delicious sauce made up of garlic, wine, curry, carrots and peas and tomato sauce, then simmered for several hours, ideally in a terracotta casserole. Restaurants usually serve it with chips (the ubiquitous British legacy), and crusty local bread to soak up the rich sauces. Traditionally rabbit stew is served on spaghetti.
Yesterday I took a photo of my rabbit stew in the making, followed by another one served on a plate. 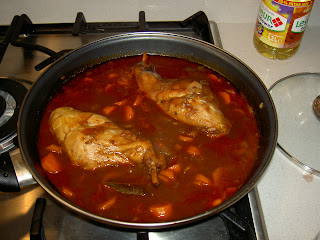 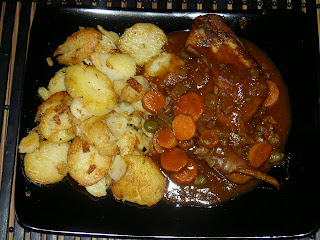 I'm not a big fan of rabbit I admit, though you do make it sound delicious, but the folklore and folk music part of the festival sounds absolutely wonderful to me.

Yummy... now that looks soooo tempting!
I did not know that the Knights of Malta prohibited the Maltese from eating rabbit in those times.
I've been to the Imnarja festival a couple of times during my days in Malta but it's never been among my favorites... I prefer the Regatta in September.