I used to think that the sound that emanated from the cicada in the morning was the same as that which the cricket produced at night. It took me a long time to realise that these two insects were completely different from each other. The diurnal insect is the one which we call il-werzieq in Maltese (cicada), whereas the nocturnal one is called il-grillu (cricket).

In the past the latter insect was very popular with the Maltese children. They used to capture this poor insect and put it inside jars so that they would hear it strumming its legs to produce its chirping sound at night inside the children’s homes. Most often they used to capture more than one and then they used to spend their time selecting which one of the crickets made the loudest sound.

Since this insect seeks warm temperatures and humid places we often hear it singing during summer nights. During the day the cricket seeks shelter under the foliage. The cricket's sound can be heard from afar but it’s not that easy to detect its place of concealment. It has a knack of hiding itself well. Moreover, as soon as the cricket detects sound it stops immediately making it all the more difficult to discover where its hiding place could be.
Sadly enough, certain human activities, coupled with the high population density, are threatening this insect. These threats which have significantly reduced the extent of many insects’ and animals’ habitats are mainly related to Malta’s relatively large built-up land area. Whereas before we used to hear a whole cacophony of crickets at night now you might hear one every so often. 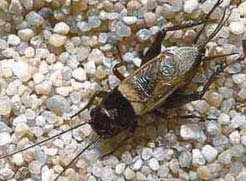 Very interesting, even I thought that it was just one insect. For me the sound is associated with the maltese summers.

I never tried fig ice-cream. Do you find this on our island? where?

Hi Dina. Most of the Gozitan restaurants sell it. Cafe Jubilee is one of them. I made the fig ice-cream last week. Was really yummy. I'll post the recipe as soon as I can.

La cicala and il grillo, as we call them in Italy... two insects that make a Summer. I remember that when I was a child we once had a tiny wooden cage where we kept a cricket... yes just like in China and Japan where it is normal to keep a cricket as a pet. I don't remember what happened to it later... very probably we must have set it free.
Sue.

The word in Maltese for cricket is very similar to the one in Spanish: "Grillo" I like them a lot :) and cicadas too :)

the sound of crickets on a hot summer's night is one of the things I miss about Malta, believe it or not!