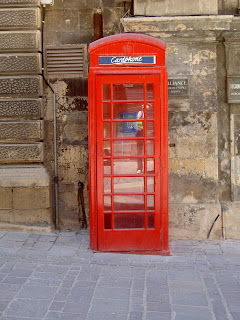 Our island, due to its strategic importance has been conquered by a sequence of powers including the Phoenicians, Romans, Fatimids, Sicilians, Knights of St John, French and British.
It was in 1800, that Malta voluntarily became part of the British Empire. The British took over Malta, and transformed the island into a Naval base. It wasn't until 1964, after 100 years of British rule, that the islands were granted independence and eventually became a Republic in 1974. It's been 35 years now since the Britons left our country but so many things around us still bear traces of their influence on our country. The famous red telephone booths which can be spotted in certain old streets in Malta are one such example .


The red telephone box was designed by Sir Giles Gilbert Scott. It's not only a familiar sight on the streets of the United Kingdom and Malta, but also in Bermuda and Gibraltar - the latter two being also ex-British colonies. Sir Scott originally suggested mild steel colour for the kiosks but the British Post Office chose the colour red to make them easy to spot. Some of these phone booths in use today have been converted to internet kiosks.
Posted by Suki at Wednesday, June 10, 2009

Oh ...How I love these telephone booths! Yes, just as much as the old (vintage) red pillar post boxes. During my last visit to Malta my daughter enjoyed taking pictures of both these last examples of British rule in Malta.
*Che Nostalgia!*
Sue.

I remember those telephone boxes from my holiday in Malta :). Much nicer to look at than the open ones you see here in Israel, or rather that you used to see here. They're few and far between these days.

I too love these! They remind me especially of my childhood and especially as Sue said the red pillar mailboxes, they have that old world charm I miss so much...hope they stay the longest while!
Thanks for the added info, very interesting : )