What is it with abandoned places, frozen in time, that makes them seem more real than any other representation of history we encounter? Why do they fascinate us so? It makes you wonder how many ghosts roam these deserted buildings... 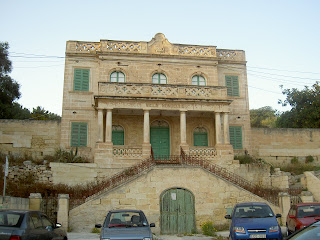 On reaching the BOV branch in Marsascala one is bound to see the imposing beauty of Villa Mondello which was built around the 1930s. It used to be a school in its prime time. The children of that time must have been exceptionally lucky to attend to such a magnificent school. It now stands there - a derelict building, witness to the continuous changes that have been taking place in this village.
Ta' Grabiel's family house 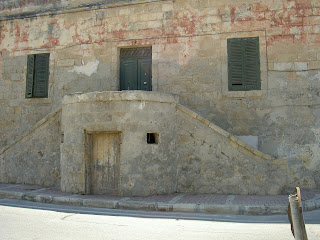 This house used to belong to the family which at present runs the Grabiel business in Marsascala. This house had an unmistakable beauty in its heyday. Unfortunately now it's up for sale. I hope whoever buys it restores it back to its original beauty. We don't want to see any more lovely old houses demolished and replaced by high rise buildings. We have more than enough in Malta. 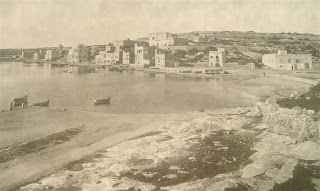 Incidentally, this week I happened to come across an old photo of Marsascala taken in 1885 and I was quite surprised to note that the house above was already in existence at that time! The old house is the last one in the right hand side of the photo. Here's a close up of the house. 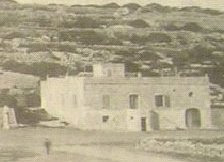 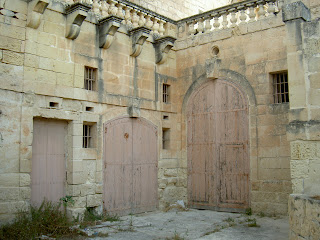 As I was strolling along the promenade a couple of weeks ago I found this old abandoned building up a slope behind Brighton take-away. Looking at this derelict building I couldn't believe that it was so quiet up there, so secluded. Only two fighting cats broke the silence that reigned in that place. The garden with the overgrown shrubs and creepers next to the house reminded me of Estelle's house in Dicken's Great Expectations. I was almost expecting an old woman hobbling in the garden. Curiosity got the better of me and back home I did some research as to what this lovely building used to be before. It belonged to the nobles Apap Bologna, on whom the title of "Marquis of Gnien is-Sultan" was bestowed by Grand Master de Rohan in 1792. These were great benefactors of the parish of Marsaskala. In the year 1997 the Apap Bologna Palace together with the chapel, was donated to the Bishop's Curia to serve as a rest house for elderly priests. However, I got the impression that the building is no longer in use..Who knows maybe I'm wrong..

This us such an interesting post and great research too.
I love old buildings and try to imagine how grand they looked in their better days.
Again thanks for sharing : )

You're welcome. Sometimes I wish I was able to travel back in the past and see these buildings in their true grandeur.

I love old houses and buildings in Malta, they are beautiful and have so much character. It is a shame and a pity that people buy them to knock them down. My husband and I are currently looking into buying an old house, restoring it and making it our family home. I just pray that there are more families out there who will do the same. Who needs more apartments anyway??

does anyone know of any place in fgura which is abandoned? im 17 and i like adventures at night with only my flash light to help me go through the dark night. any help?