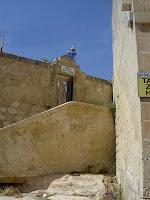 Coastal redoubts were one type of coastal defences built in the early 18th century. The most numerous types of fortifications of this period were the coastal batteries, which were generally built in vulnerable bays opposite each other and armed with cannons. On the other hand coastal redoubts were built in the middle of the bay in order not to let enemy forces disembark their troops ashore.
They operated as an infantry defensible stronghold to resist enemy troops. The idea of building this type of fortification was brilliant because if enemy soldiers were able to disembark their soldiers, they would overwhelm these fortifications quickly. The reason was because in the middle of the bay there was no fortification. But with the introduction of the coastal redoubt the situation was different because all the vulnerable points of the bay were defended by these coastal fortifications.
This redoubt is currently being used as a police station in Marsascala and is very close to the parish church. It is one of the best preserved redoubts in the Maltese islands. It was built in 1715 at the expense of 768 skudi by the Commendatore Gio.Battista Briconet and was initially garrisoned by local militia from the Zejtun Regiment. It consists of a pentagon-shaped fortification and entrance was from the side today facing a private building. A redan, ( a work in a V-shaped projecting angle) fitted with musketary loop-holes, was erected. Obviously such a small fortification was not meant to deter any potential landing, but to slow down an enemy's movements once on land.
Posted by Suki at Tuesday, May 12, 2009

WOW you amaze me ... where do you get all this interesting info?
Thanks, your posts about Malta are so interesting!
Sue.

Hey Sue! I always make it a point to browse history books/historical sites on the net before posting a blog.