The balconies are unequivocally an important feature of the Maltese streetscape. They are amongst the first characteristics of Malta you notice. In many ways, they are similar architecturally to those of the North African countries. In Gozo and in some older Maltese villages, you’ll see square stone balconies, often elaborately carved. The elegant wooden balconies of Valletta (the capital city of Malta) were used as a view point for families to catch up on the business of the streets below. Today in Valletta you will see baskets lowered from balconies for the baker to pop in a loaf of bread. This simple act saves the home owner several tortuous flight of stairs. The finest and longest balcony is that of the Grand Master’s palace in Valletta. It stretches around corners and along the side street walls.
It is believed that the first open balconies built entirely from stone began to appear locally during medieval times and that the first closed timber balcony appeared around 1679, when the corner balcony of the Grand Master’s Palace in Valletta was covered with a timber and glass structure joining all the rooms on this side of the Palace. During the 18th century the popularity of the closed timber balcony spread from Valletta to the villages where it became fashionable to replace the open balconies with an enclosed timber one. 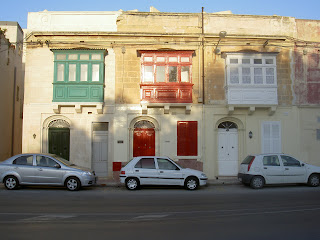 Last Friday I woke up early and went for a drive round my lovely hometown. I took photos of some particular houses which caught my attention. These three houses with their different colour schemes look really lovely next to each other. Don't you agree? 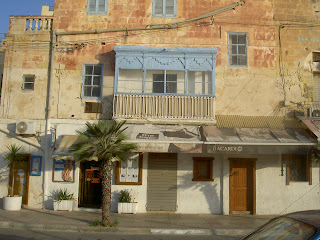 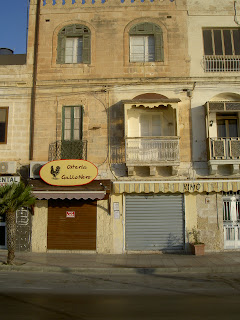 I took photos of the above balconies because I think these Marsascala houses are pretty old. And their balconies are rather unusual. I have never encountered such balconies anywhere else in Malta.
Posted by Suki at Monday, May 04, 2009