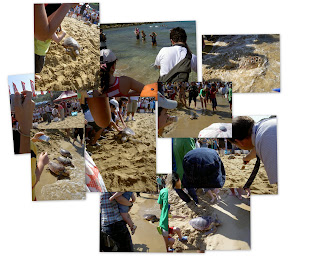 Last Tuesday I was invited to watch eleven turtles being released at Golden Bay. It was a lovely experience to see such large turtles being set free again. Nature Trust (Malta) in collaboration with the San Lucjan Fisheries centre organised the Turtle Release event together with Eko skola. There were various schools who attended this event. The turtles had been saved and now were being released back into the wild after their long rehabilitation period at the San Lucjan Aquaculture Centre. These were injured turtles that had been brought ashore in the past months by members of the public, fishermen, NGos such as Birdlife and BICREF and or the Wildlife Rescue Team of Nature Trust (Malta). These turtles were taken care of at the San Lucjan Rehabilitation Centre in Marsaxlokk. Volunteers of Nature Trust went each week to San Lucjan to help clean, medicate and care for these turtles till they were fit again to be released. 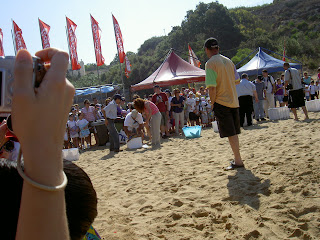 The turtles were brought in plastic basins and were covered with wet towels to protect them from dehydration. You can see the silhouette of one turtle in the blue basin. 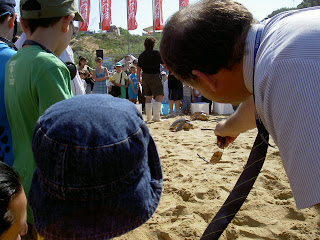 The first turtle is released! Everyone awaits its arrival with trepidation. 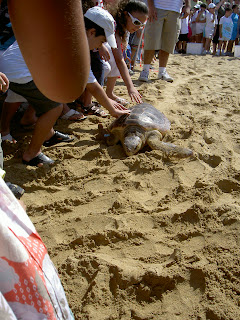 Some kids try to pat its back before it goes back to the beckoning sea. 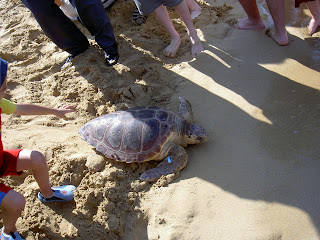 Last couple of steps and off to swim! 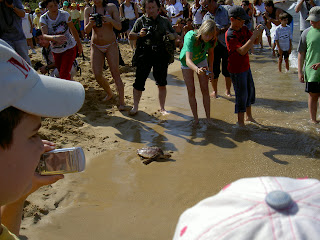 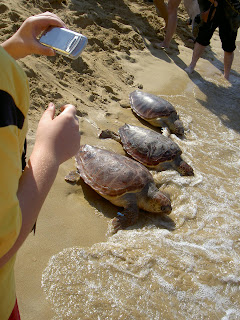 I hope they are left free to catch those dreaded jellyfish and eat them to their hearts' content!
Posted by Suki at Friday, July 03, 2009

It's nice to see how considerate of the animal world we humans can be sometimes...if we all respected nature and the animal kingdom I am sure this would be a better world.

Amen to that Sue, I totally agree!

That was a very precious posting Zen, thanks for sharing your experience and pictures : )

Ooh yes, eating jellyfish would be a VERY worthy goal!

What a great event to be a part of, and a terrific learning opportunity for the children.

That's brilliant, I would have loved to be there with my children.

I was so happy when I read your post and saw the pictures! :) I also hope the turtles will eat all those jelly fish :)