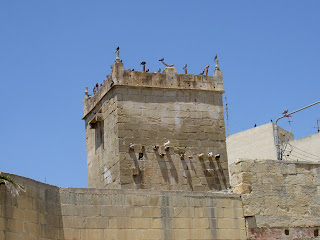 Wild pigeons had been living in Malta thousands of years before the first inhabitants arrived on rafts or canoes from Sicily. These pigeons lived on cliff ledges and in holes in cliff walls, as well as in man-made buildings – a characteristic which led to them being domesticated.

Before the advent of guns, ways and means were found to catch wild birds for food because there wasn't much else available to the poor by way of protein, except for snails scavenged from fields. When guns arrived they were for the privileged few - unaffordable to those who could not even pay for a pair of shoes. So the poor people had to find ways to catch wild birds in quantity without the use of weapons. They came up with the idea of building a dovecote or barumbara as an integral part of the house - except that it wasn't for doves but for pigeons.

Farmers used to build ledges and holes in the walls of their farmhouses to be taken up by the domestic pigeons, which were induced to stay around the farmhouse by being fed on grains and other seeds. These man-made ledges and holes in walls came to be known as 'Barumbara' in Maltese. This is probably a corruption of the Sicilian word 'palummara' or the Italian word 'columbara' - a place where pigeons live and breed.
Each old Maltese farmhouse used to have a barumbara in one of its walls. There are also several areas and streets in Malta known as Il-barumbara, indicating that there must have been ancient dovecotes in the vicinity. The pigeons were encouraged to breed in the upper section of the house, where four or five rows of nesting places would be made in each of the walls. There might be up to 100 nesting places in one small room!
Nowadays you might come across some old rural dwellings with just a few nesting places for pigeons incorporated in the facade as the one I found in Zabbar.

Email ThisBlogThis!Share to TwitterShare to FacebookShare to Pinterest
Labels: Il-Barumbara

At least you have pigeons there, we have loads of crows over here and they're scary birds.

How interesting. I did not know that. I thought they kept the pigeons as a hobby. Oops :)

We need more of these today even if they are not healthy... the pigeons and doves have few trees left for their nests especially in Malta. In Italy many "comuni" which I think stands for your local "councils" put manmade bird nesting boxes in the parks to help with this ever increasing problem but I think they're not meant for pigeons but smaller birds. Pigeons are becoming a big problem especially in populated areas.Some problems are the results of man's interference with nature... homing pigeons was useful in ancient times but we can do without it nowadays.
Oh ... I'm sorry for the long comment!
Have a nice day!
Sue.

Wow, this is very interesting. I've heard of the word Barumbara but it never crossed my mind to get to know what this really is or was used for. Thanks alot for this information. As I might have mentioned already, I love anything that has to do with old buildings here on our lovely island. As a matter of fact my husband and I were looking at a 400 year old property in Gudja to buy and convert into our home, but we were refused permits because of some of the old features in this house and funnily enough one of them were these six holes in the wall were pigeons used to breed and rest !!

@ Dina - you could have always kept some pigeons in that property! That way you would have not been refused permits. : )

@ Nick- we don't have crows here but aren't they funny creatures with their cawing sounds?