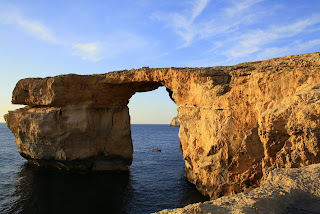 The Azure Window
Last weekend, Friday being a holiday, my husband and I decided to join our friends for a weekend break in a farmhouse on our sister island of Gozo. We were very lucky to have such beautiful weather and my husband and another guy even had a dip in the pool. On Saturday afternoon I left my female friends tending to their babes, while our hubbies played poker beside the pool and went for a drive without any particular direction in mind. I kept driving until I reached one of the most emblematic nature reserves in the Maltese islands: Dwejra. Sun was setting soon so I took out my new camera to snap away at the beautiful views in front of me.

It was a a gentle wind that blew around me. I stood fascinated looking at this beautiful sight in front of me which has been witness to so many eons of time; where rocks, sea and sky have played together in all their majesty for longer than any of us can hope to remember. On one side there was Fungus rock which seemed suspended in a perennial timelessness of its own, a silent sentinel to the surrounding area. This islet, which rises about 60 metres above the lapping waves, has been nicknamed "Il-Gebla tal-General and "Il-Hagra tal-General" all alluding to the once presumed fungus growing on this islet. Actually, in real fact it was found to be a plant which was highly valued at the time of the Knights of St John. They discovered a number of thereapeutic powers in this plant. They found it had the ability to cure typhoid, dysentery, venereal disease, hypertension and haemorrhage. A sort of primitive baskets and pulley system was connected from the cliffs of Dwejra to this islet and the place was guarded day and night. Grandmaster Pinto ordered that trespassers found on the islet would be forced to row in the Order's galleys.
A short distance away of Fungus Rock there's the iconic Azure Window, known as iz-Zerqa in Maltese. Unfortunately, this majestic natural arch is in imminent danger of collapsing. The name Dwejra which means "little house", with its curious rock formations and spilling seas, is a magical attraction offering opportunities for swimming in the spectacular deep-sea or in the Inland Sea and the unique experience of diving in the so called "Blue-Hole" near the Azure Window.
Posted by Suki at Friday, March 26, 2010

Sounds like you had fun, good for you Zen!
Yes it was a beautiful day, we had a wedding and it was nice to be able to stay outside in the gardens.
That's a great picture of the Azure Window...I was sorry to hear about it being in danger of collapsing, I wonder if anything can be done to save it!

Wow, that is a cool pic of the Azure Window. From what I read, you guys had a wonderful time :D

I think it's one of the many breathtaking masterpieces of nature ... I hope something can be done to save it.
Zen, thank you once again for another beautiful post.
Sue.

I love the Dwejra are - there are so many photo opportunities, and it is always gorgeous at sunset.

Happy Easter to you and your family.

Hi Zen
Thanks for a great photo and for reviving a great memory for me. My husband took a lovely shot of the Azure Window a couple of years ago. We love your country, have visited often, and hope to return soon. Thanks for a lovely blog. God bless you.

It can get quite crowded, but Dwejra is still one of my favourite spots in Malta. I really hope the arch can keep on defying gravity into the future.