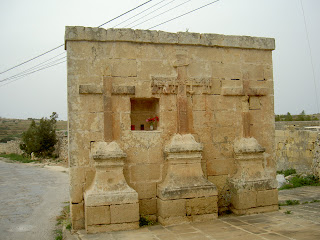 During one of my walks in my hometown of Marsascala I came across this strange monument in the Bidni area. It's got these three crosses engraved on a wall. The middle cross which is slightly larger than the other two has around what look like seven tools hanging from it. My question is who erected this memorial and for what reason? It's a pity that there is no date or inscription to explain why it was built in the first place.
Till 1615, Zabbar and Marsascala, were still forming part of the Zejtun parish. At that time a mere 650 people inhabited Zabbar. As was the practice, Bishop Cagliares established the limits of the young parish. As a matter of fact, a section of modern Marsascala remained within the limits of Zejtun, while another part which included the areas where the first parish church of Marsascala was built, fell within the limits of Zabbar. It is possible that the Three Crosses at Bidni were put up as an indication of the place where the limits of Zejtun and Zabbar met.
According to Guze Muscat Azzopardi there are three versions regarding the origin of these crosses. There were three monks who got killed by the Turks and buried here, the second version says that a man died of the plague and was buried here by the villagers of Zejtun and the last version is undoubtedly the least credible one: an elderly hermit was buried three times in this place after repeatedly rising from death.
Posted by Suki at Saturday, April 18, 2009