Yesterday I prepared this super easy strawberry flan (and which was a great success) and thought of sharing it with you. I know it looks very amateurish but when you've got loads of strawberries you need to think up a few ways of making use of them.

What you need is :

First I prepared the jelly mixture. The trick here is to use half the amount of water shown on the pack. That way you avoid having a soggy flan.


Then I added the amount of milk required with the Dolceneve mixture and whipped it for around 5 minutes.


Next, I cut the flan in two and poured the jelly on the bottom half. Then I spread some of the whipped cream on top of the jelly.


I replaced the top part of the flan and continued spreading the cream on the top part. Finally I cut each of the fresh strawberries in halves and decorated the flan with them. Super easy and really yummy!


Here's a photo of half of my flan. I'll leave it to your imagination to guess where the other part of the flan has gone! 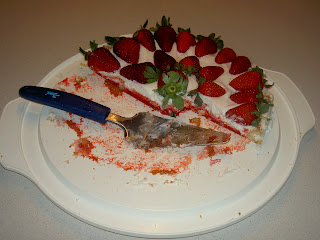 Mmmmmm, looks so yummy! Any leftovers still LOL!
I thought not...I hope you had fun using the rest of your strawberries.
See, I told you I'd be back : )

Hey Doreen I see you kept your word. And that's nice of you. Yes I did have fun eating the rest of the strawberries. This week I'll have to think up of some recipes using lemons cos i've got lots of them..tomorrow I'll try baking a lemon cake.

Lol, I'm just a girl who's got this passion for cooking and trying out new recipes and sharing them with all.