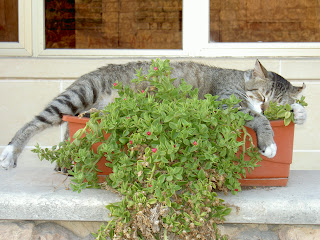 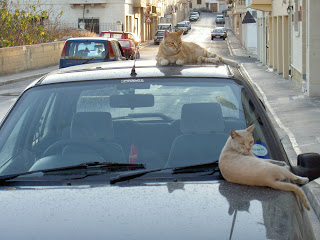 Many stray cats roam in this street and everyone does his bit to take care of the cats. All these neutered cats are fed daily and taken care of by the people living in the street. However, when some heartless people decide to abandon their pets in the area the cat population starts accumulating again. A vet once said that a single cat and its offspring can cumulatively produce up to 70,000 kittens in 7years. Quite a large number of cats, isn't it?
Posted by Suki at Monday, August 10, 2009

This is so very true!
They love to nap in very strange places, the other day I found our cat in the bathroom... guess where... in the bidette! Pity I did not think of taking a picture right then.
LOL!

Oh I love the cat in the planter picture, I think that is just sooo cute!
In the second picture the cats seem like lionesses sprawled on the car!
I have noticed they like to move at the very last minute...I saw a car trying to park with a cat in the way which only moved when the car was very close!

I've got a whole colony of stray cats that live in my backyard that I've taken to giving them all their own names ... hehehe ...

@Sue - as time goes by, you'll be surprised at the places that Tod will choose to sleep in. in/on wardrobes/ TV sets, on pillows, on window sills..the list is never ending.

@Doreen - I agree with you. That's what I thought when I took the second photo - two lionesses/tigresses sprawled on a car.

@Kle - you had me in stitches when I read your comment. Your comment about "Malta being run by cats" - was way too funny!

@Nick - a whole colony in your backyard?!! How have they taken to Pebbles in their 'territory'?

Welcome on board Cola and Giselle!

Hello. My name is Adriana. I am a friend of Clare's and she led me to your blog with one of her posts. Malta is just gorgeous! I have now added it to one of the places I MUST VISIT! Beautiful blog.