A walk round the city of Vittoriosa, (Birgu), (Part 2) 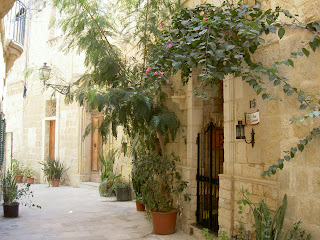 The different food aromas wafting up from the windows signalled the approach of noon. Walking in the shady streets I got so engrossed in distinguishing the different smells that were teasing my olfactory senses that I nearly missed this quaint old Norman style house in North Street.

I went back a few steps and looked at the open door - was this a museum? or was it just open because it happened to be so I asked myself. I read the Information display outside: This house with Siculo-Norman features was built in the 13th century. My! That was a long time ago! 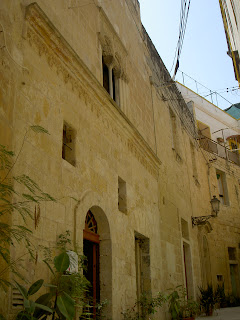 I ventured inside, making shuffling noises just in case there was anyone inside. Silence...I became more adventurous and nimbly climbed up the tiny stairs that led to this one tiny room upstairs. There was a chest of drawers, a plate for donations and an album displaying the 'before' and 'after' photos of the house I was in. Yes, it was a kind of free museum - its owner had restored it to its original design and left it open for the curious tourists. How nice of him! I didn't take photos inside as it was too dark. I was glad for two things: that I had gone inside a very old house and seen with my very eyes the interior of an old house in Birgu and that I discovered another Norman house in Malta. I had previously thought that there was only one house with a Norman style in Malta and that was in Mdina. 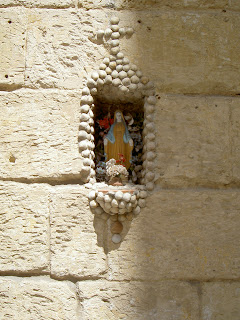 I carried on with my journey of discovery round Birgu and spotted this small niche of a small Madonna lovingly decorated with sea shells. I spied another niche with a carved Madonna in another street corner. It is evident that the Madonna holds a special place in the hearts and minds of the Maltese people. 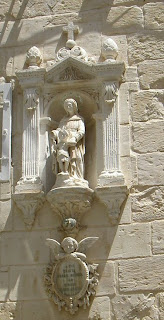 Wandering in the silent and shaded streets I found this Butcher's shop - couldn't help taking a photo of it. And I also loved the facade of this new restaurant. 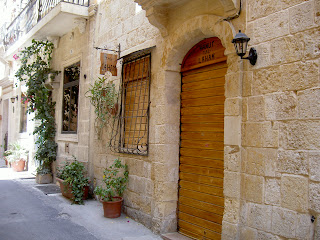 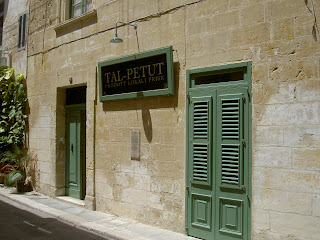 Finally, in Pacifiku Scicluna Street, I came across this small building wrapped up in old electricity supply wires which used to house the executioner and his family during the times of the Order of St John and the Inquisition. His symbol can still be seen engraved on top of the windows. 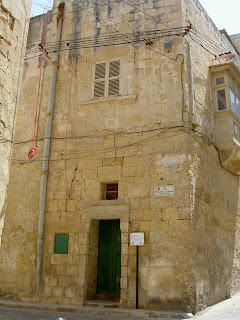 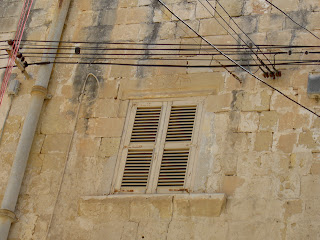 There was so much to discover in Birgu. Each street had its own characteristics that distinguished it from the others leading to it. The inhabitants of Birgu have worked together to beautify their city - they have put plants everywhere, they have restored their houses with pride and they make sure to keep the streets clean. My journey came to an end with a mobile call which reminded me that my time was up - I had to go back home.
Posted by Suki at Tuesday, September 08, 2009

I love Birgu, in fact that is where we first wanted to settle but couldn't quite afford an old house there but still love to walk from our side of zabbar down and through the streets, especially in the evening time. I am very curious about this Norman house and love that you were able to go inside! Will be walking there next week for sure (even if it is with three kids in tow). Lovely post!

Great post! Makes me feel as though I'm there again already :o)

What an interesting post to follow your Part 1, I loved all the pictures and the part about the Norman house too...will there be a Part 3 I wonder : )

Good god, those are excellent pictures :D The streets look so clean unlike here.

Juniper: I agree with you: I think living in an old house in Birgu would be lovely. Hope you manage to find this Norman House.

Angie: you'll soon be wandering in our streets again! The months are decreasing...BTw you should put a ticker in your blog to count how many days to go for your emigration to Malta

Doreen: I'm afraid there won't be another part to this Birgu story. I've exhausted my photographs.

Nick: Why don't you take out a broom and start sweeping the streets? joking..We have our own dirty streets too but this old city happens to have a council which really works hard and encourages the city dwellers to be proud of their city. There were so many placards in the street thanking them for their cooperation. That does give them a boost!

Hmm, I wish other councils would follow their example : ) We should all be proud of our neighbourhood anyway so I don't know how people can litter as they do!
No Part 3 :( oh well, I will go over Parts 1 and 2 and enjoy them again : ) Thanks Zen!

How lovely that the owner left the property open for all to enjoy, what a trusting soul.

Love this post!! as I mentioned earlier I have a love for the older parts of our island and old houses. I must get my kids and venture there sometime. Very special, thanks for all the photos.

What a lovely walk, I enjoyed it!

Agree with you Doreen. We should all be proud of our country and not just our neighbourhood.
@Robin: Yes, I felt like an intruder. So unusual for someone to be so trusting with his property.
@Dina : yes you should take the kids there sometime, maybe in spring when it's less hot.
@Jientje: Thanks. It was my pleasure.

This was a wonderful post. I feel as though I need to go there and see. Malta is one of those places in the world that one knows so little about and posts like this are intriguing.

Isn't the Norman house just great? I have just been with our guests from Canada and the owner himself showed us around and explained a few things about the restoration of the house.